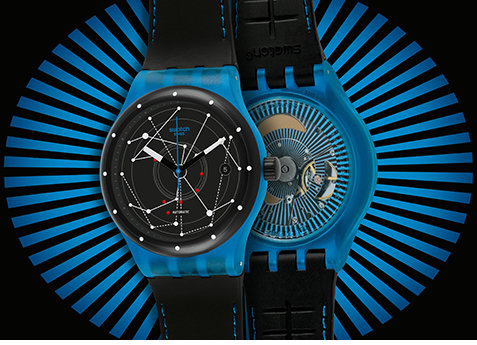 Swatch’s SISTEM51 range, which caused a stir after its initial limited launch in December 2013, has now seen a worldwide launch.

The SISTEM51 is a unique creation for many reasons: as a mechanical, self-winding watch that requires no maintenance, it is a triumph of design. The watch has also been noted for its affordability (it is retailing for around $150 in the United States).

Available in blue, white, red and black, the SISTEM51 is so groundbreaking that the watch’s design currently has 17 patents pending.

The watch has also been praised for the minimal simplicity of the mechanical design. Made up of just 51 components, Swatch said in its launch statement: “most mechanical movements have at least twice as many parts; some have more than 600. 51 is the magic number (and Swatch’s lucky number too)”. All of these components are built around just one screw in the watch. Swatch claimed that it was inspired by the solar system itself, with the screw acting as the sun.

“The front tells the time, the back tells the story”

The watch is entirely made in Switzerland and features a 3Hz movement, a 90 hour power reserve and a hermetically sealed case, meaning it is just as durable as the original Swatch watches. There is no danger of dust interfering with the automated mechanical movement, which took two years to perfect.

The watch doesn’t require a battery, is waterproof, safe and requires no care from its owner.

Originally meaning “second watch”, Swatch has always been about practical design at low prices, but the SISTEM51 range is proving Swatch to be leaders in watch design, rather than the safe, cheap choice.

The watch officially launched in London at the end of 2013, but it is now being rolled out across the world. Soon SISTEM51 watches will be available at Swatch shops, department stores and airports.